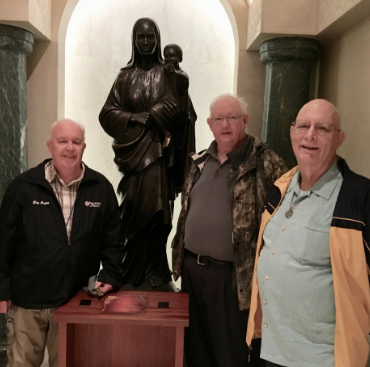 Brother Frank (center in photo) on his vocation:  “I felt strongly that God was calling me to something more permanent [than the Peace Corps, popular at the time]. I got to know the Edmundite Community and I really liked what I saw. I never considered any other religious community; you could say I ‘fell in love’ with the Society of St. Edmund.”

Over the past 50 years as an Edmundite, he has served in emergency medical services at St. Michael’s College; worked as a registered nurse and nurse practitioner in Venezuela, Vermont, and Alabama; and been a teacher and tutor for preschoolers, elementary school kids, and recent immigrants. He currently is a spiritual director at St. Anne’s Shrine (Vermont), a prison minister at two Vermont prisons, and works with disabled veterans in Project Healing Waters Fly Fishing.

Brother Tom (right in photo): “God doesn’t put it in big letters and write it across the sky. He gives you lots of hints and whispers.” Brother Tom entered the Edmundites, obtained a degree in psychotherapy, and was active in AIDS ministry in the 1980s. “I was asked to bring a young man communion,” he said. “I did that every week all the way through the night before he died. That was meaningful for me. This crystallized my chosen vocation—something needed to be done and I was not afraid.” Tom also has worked in Boston and at The Howard Center in Vermont. He loves photography, gardening and geology.

Brother Pete (left in photo) was a 25-year-old London stockbroker who had known Edmundites as a teenager when he began to consider a vocation: “He explained this felt like the Gospel story when the apostles knew nothing but were called to follow Jesus. ‘I thought if they can, I can,’ he said. ‘And from there it was all God’s doing.’”

An accident while exploring caves led him finally to make a change: “I had no broken bones. I knew God had taken care of me. I knew right then that I wanted to spend the rest of my life taking care of other people and I immediately thought of the Edmundites. This was a call to be other-centered.”

He’s been ministering to the needs of the people in Selma, Alabama for the last 20 years, currently with the home bound and sick. This year he celebrates 50 years as an Edmundite Brother: “I have never had to worry about work, finances, or personal desires,” he said. “Everything in my life since I became a Brother has been fulfilling. It is a gift. And I bring that gift everywhere I go.” He added: “God gave me the strength to make changes,” he said. “God has made all of this possible. Choosing to be a brother is a special call. It is to deny oneself for something greater.”

Excerpted from “Brotherly advice on how to answer our own individual call.” Read the full story and be inspired!

The Society of Saint Edmund is a religious community of Roman Catholic priests and brothers founded in 1843, whose mission is to serve where the need is greatest. Their four core ministries are social justice, education, spiritual renewal, and pastoral ministry. “We seek to serve as Jesus did, and to make known the love of His Sacred Heart for all.” 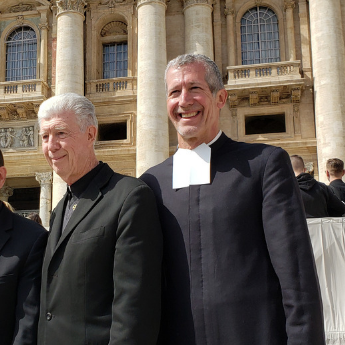